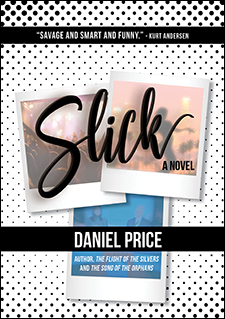 Instead of getting nasty, Singer gets creative, attempting to circumvent the scandal by creating a bigger one—a grand and epic hoax that will dominate the news cycle and eclipse one lie with another. It’ll be his greatest achievement to date, if it works.

Available now as a $3.99 Kindle-exclusive e-book.

“Savage and smart and funny, and not without some redeeming glimmers of wisdom.”
…………— Kurt Andersen, author of Turn of the Century

“An all-too-real slice of the PR man in action.”
…………— Jay Cooper, former president of the National Academy of the Recording Arts and Sciences

“Price’s debut just might do for unctuous PR flacks what Paradise Lost did for the Prince of Darkness himself—put a tragic, even heroic visage on the devil you only think you know.”
…………— Time Out New York

“An impressive debut for a satirical moralist who can stand comparison to Christopher Buckley or the young Evelyn Waugh.”
…………— Wilmington, North Carolina Star-News

“Price keeps the 450-plus pages turning with snappy wordplay and vivid, surprisingly complex characters. A dark meditation on the art of manipulation, this is a must read for anyone riveted—or repulsed—by the news.”
…………— Booklist

“Slick is a sharp and stylish read, outrageous in its ability to simultaneously shock and educate. It reveals the strings that manipulate the news without being self-righteous. This book is a page-turner for anyone inside or outside the media.”
…………— Mediaweek UK

So is this just one big caper comedy or is there more?
Much more. Slick is the story of a sharp and clever media operative whose cynicism keeps him at arm’s length from the world. In the course of two eventful weeks, his personal and professional life are turned upside down, and he’s led to question everything he believes. Whether he gets better from worse from there…well, you’ll just have to read it to find out.

It’s hard to tell from the description if the novel lionizes or demonizes the modern-day publicist. Which is it?
Neither. There are no pure heroes or villains in Slick. Just a lot of mixed-up people with complicated motives.

Why is this novel only available as an e-book?
Slick was originally published by Random House in 2004. Once the hard copies went out of print, I re-acquired the rights. Now I’m releasing it on my own as an e-book.

Why Amazon only?
There are strong marketing incentives to go exclusive with them. Some writers prefer it. Some don’t. I’ve had pretty decent results with it so far. Apologies to Kobo users who are left out in the cold. The Android and iPad owners can use the free Kindle reading app.

Have you made any edits to the digital version of Slick?
Yes. Shortly before the e-book release, I went through the novel and cleaned up passages that Younger Me got away with but Older Me couldn’t tolerate. The result is a cleaner, tighter read. I’ve never been happier with it.

Did you update any of the cultural references?
No. This story still takes place in February 2001, in that cozy little space between Columbine and 9/11. To update it for the Facebook/Twitter/ZOMG Terrorism! era would turn it into a whole different book. Just think of it as a period piece.

Let’s say I liked The Flight of the Silvers and have just now discovered Slick. How much will I like it?
That totally depends on your preferences. The two books are insanely different from each other. If you’re seeking the same level of death-defying action and supernatural hijinks as in The Flight of the Silvers, you’ll be disappointed. If you liked the quirky characters, humor and wordplay, then you’ll be delighted. All that stuff gets turned up to 11 in Slick.